Anyone know what had happen to CSSVault website? I posted about my web design inspiration a few days ago and I received a comment from Dybcio, he told me that the site redirect to the Apple Gazette page. I double checked and what he was saying is right. CSSVault, used to be the web designer’s bets web gallery and inspiration. Now, become an Apple Gazette page, do anyone of you know what had just happen to them? It is kind of disappointed if the site has went down just like that.

This is how the site look alike before this. 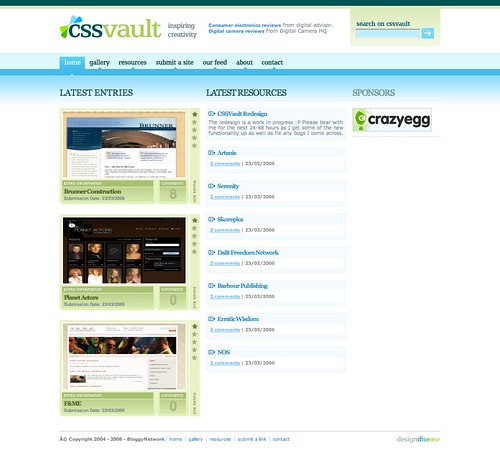 Thanks to my reader – Dybcio again. Well, I just found that CSSVault sold by BloggyNetwork to HostGator Web Hosting for $100,000 on March.

According to them, this isnâ€™t a simple purchase – itâ€™s an investment. So, we all just wait and see what will happen next and also waiting for the site revamp soon. Cheers!

But the thing is, the purchase was on March of 2007 and now is middle of 2008. Anyone else can provide more recent update to us? Thanks!

Something related to what you are reading.
add RSS

Check out our popular articles and recent comments by other users.

Check out my portfolio.
View All